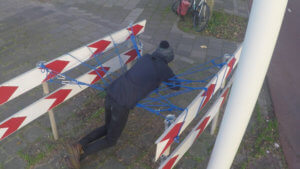 The Flexibility of Urban Structures
This Project has the aim to draw attention to the many structures the Built Environment provides in urban space and to use them as corner stones for flexible objects, temporarily created between them.
The comfort of a hammock and the playfulness of a swing are premises for a repeated performative act in building, using, and rebuilding said objects in different architectural, social and public surroundings.
Thereby not only the designer is confronted with the effect of the delivered furniture on space, the change of perception and the used structures: Questions are drawn for the residents passing by, an audience is created by the performing act and its unusual and often impractical form.
What is this?
Is this allowed?
What purpose does it follow?
These interactions provoked by attaching to Public Space and thereby common good lead to
encounters. The resulting dialogues motivate further questioning of the aggregations of said structural premises.
The goal is to repeat the discussion on how much of the Built Environment we as the Public have to accept as given, unchangeable and finished. Within this discussion the Right to the City and the collective responsibility to create change are brought up.
Leaving no mark on the structures used and being spontaneous and temporary these interventions follow the idea of tactical urbanism, in which the main impact remains in a change of perspective for those confronted with it.