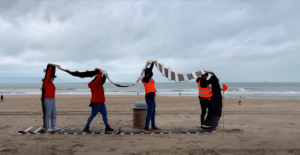 Amirhosseini Ariana and Hartstra Tjitske
Project text
11.2020
HAVE FUN WHILE (OUCH!) DOING IT
The “Humantank” is a heavy game played on the beach. The idea is to let people work together as a team and achieve the goal of bringing the object from a flag to another, even if they fail because of some external and unexpected events like the wind. The patterns, or mess, left behind in the sand is a two-dimensional resentation of the act that took place. Showing the different, and sometimes failed, attempts. After leaving the beach, the intervention remains present for a short time until the people and the wind slowly erase it and make their own mess.
Working in a team means to appreciate differences and be able to match it in a way that makes the team stronger, more positive and fun. It should also make it easier to like the work, even if it’s hard to do. Being part of a team, gives you a sense of belongingness, which nowadays is something that more and more people need.
We failed, made a mess, tried again, failed again, worked together, scraped ideas, have been helped, and felt lost. But that’s the point: new ideas emerge by interesting collaborations and combinations. Interesting combinations arise when things are out of place like in a mess or when things do not go like you expected.
By working with a high activism, moved by the chaos, the mess, the instincts and without being scared to fail, we just tried and “had fun while doing it”. The project is a result of this.