Searching for an alternative mutual-religious space in South Korea

The starting point of my research was to define a ‘Sacred-Spatial-Experience’ in various religious spaces. Being Catholic, I’ve often experienced the intense and divine atmosphere in worship places like churches, mosques and temples. I am convinced that many travellers, regardless of their different beliefs or non-beliefs, visit religious places for personal reasons and experiences. What are the architectural elements and spatial layouts that enhance a spiritual experience? By doing fieldwork, I described my personal observations as a spatial designer and analysed various worship places by distinguishing three layers: symbolic identifiers, immersive space and sensory experiences. Finally, I investigated the spatial configurations of some holy spaces based on a typology research.

Considering the diversity of religions, my aim is to enlarge the target groups using religious buildings and to strive for an alternative use that encourages an inter-faith dialogue among believers and non-believers. As I’m from South Korea, which is known as a multi-religious country, I explored the ritual practices in the three dominant religions of my home country: Protestant, Buddhist and Catholic. By interviewing different people, from atheists to religious leaders and architects whom designedfor worship places, I acknowledged the possibilities for an inter-faith dialogue in the South Korean society.

My proposal is a design for an alternative mutual-religious space in South Korea. A new type of temple that should enhance a sacred-spatial-experience for every visitor. The building consists of three elements: a centred-main hall, a symbolic illuminated altar and three temples connect to each other by one continuous floor and roof. The altar located in the centre represents harmony among the different believers. The lighting fixture in the centre of the main hall has an abstract appearance but viewed closer the visitor reveals different symbols of Protestantism, Buddhism and Catholicism signalling the way to one of the temples. According to the wishes of the visitors, everyone can follow his own path through this united spatial-form that hopefully raises an inter-faith dialogue between the different religious visitors and non-believers. 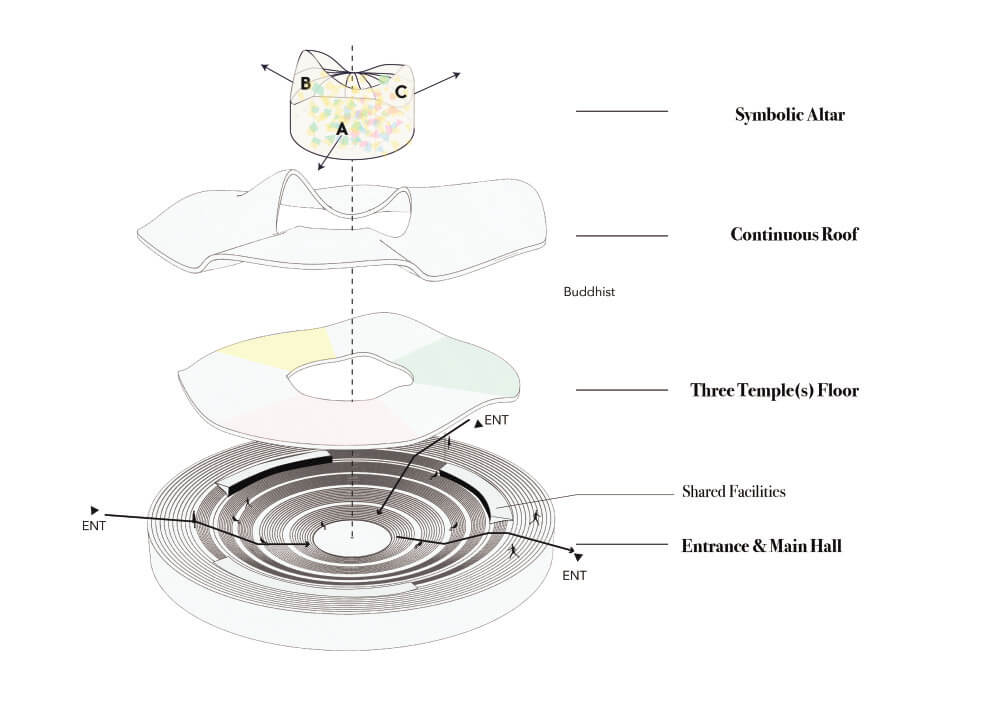 All images @INSIDE & Shin Young Kang